John's Revolutionary Wish: How the Community Came Together 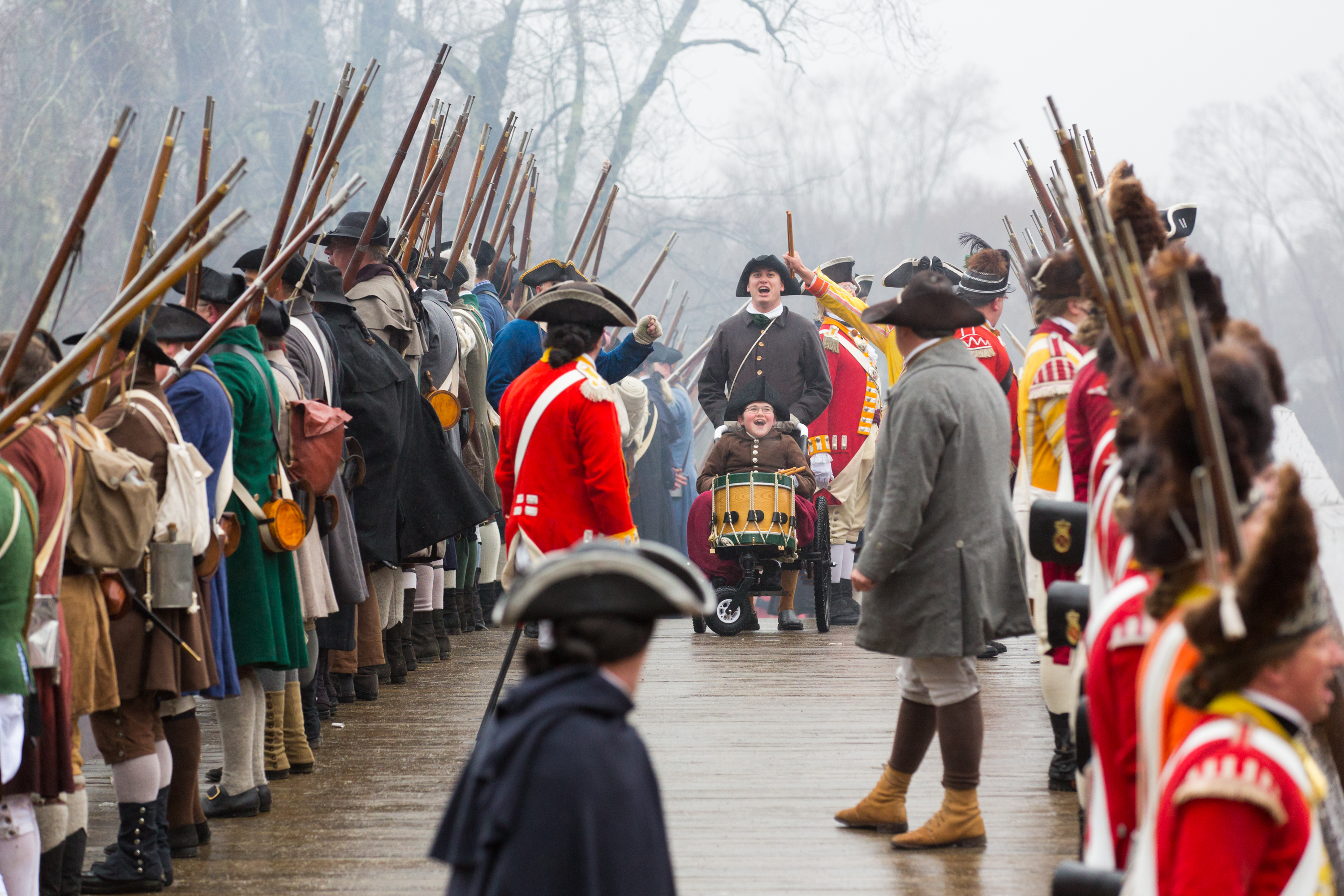 For 14-year-old John, navigating life with Duchenne muscular dystrophy is not simple. Since losing the ability to walk at the end of 7th grade, his daily life has become much slower, more challenging, and more isolating.

Since John’s condition prevents him from doing the physical activities his friends enjoy, he focuses on other interests. John is an avid history buff and he also enjoys playing drums. He is especially fascinated with early American history and he admires “how the colonists started out as such a rag tag group that managed to create a country and beat one of the most powerful armies in the world.”

When John found out he qualified for a wish, he decided to combine his love of history and music. He wished to be a drummer in a Revolutionary War reenactment.

When John made this wish, he had no idea just how far-reaching this wish would become.

Six months before his wish would take place, John began drumming lessons via Facetime with Anthony Jenkins, a drum instructor and reenactor in Massachusetts. Every Friday afternoon, John rushed home from school for his lessons.

For John, the drumming lessons were pivotal to his experience. John's mom, Jackie, says, “The friendship they built and the things John learned from Anthony about history, drumming and Boston could have been a proper wish on their own.”

At a time when John was losing mobility and independence, anticipating and preparing for the wish was empowering. Jackie says, “John’s wish really came at a pivotal time in his life.”

John and his family flew to Massachusetts for Patriots’ Day in 2018.

On the eve of John’s wish day, as the weather forecast became increasingly stormy, the official public reenactment event was cancelled – yet the reenactment community wouldn’t let weather get in the way.

They rallied together and came out in full force to make sure John’s wish came true!

“The reenactors poured their hearts into John’s wish in a way that none of us was expecting,” said Jackie.

In the early morning hours of Patriots’ Day, John and his family enjoyed VIP seating and a special welcome at the Lexington Battle reenactment. John then joined the Acton Minute Men for their march to Concord, where he and his drum led the way to the North Bridge for the battle demonstration. John played the official drum commands, alerting the reenactors to fire their muskets.

When asked about his favorite part of the wish, John said without wavering, “Marching with the Acton Minutemen on the old North Bridge. I was there playing the drum commands, and they all fired when I played the commands.”

John’s wish magnified the collective strength, heart, and compassion at the core of the Make-A-Wish mission. It didn’t even matter that the official events were canceled; the community came out to support this young man and his wish.

Jackie said, “I wish I could bring people back to that day, to that bridge in the rain, to experience John’s wish day for themselves. Then they would have no question that what Make-A-Wish does matters, not only for the wish kid and the family but for the volunteers in the communities where these wishes take place.”

His wish continues to impact John and his family today. Jackie says, “John came home from his wish with a renewed interest in music. His brother is learning how to play the fife and they are trying to start their own drum and fife corps in Alaska.”
“There’s a feeling among us all, my family, the reenactors that John’s wish wasn’t just a one-time event but really the beginning of something.”

Wishes provide immense hope and joy in uncertain times, which may be particularly vital right now. Make-A-Wish Alaska and Washington is currently granting wishes following health and safety protocols, including wishes for things like virtual shopping sprees, virtual wishes with celebrities, wishes for things delivered to a home like gaming systems or musical instruments and any other wishes that are able to be granted locally.

This site has been approved by the Local Federal Coordinating Committee.
© 2022 Combined Federal Campaign. All Rights Reserved. The CFC is a program of the U.S. Office of Personnel Management.