Raiden becomes a SWAT team officer for the day 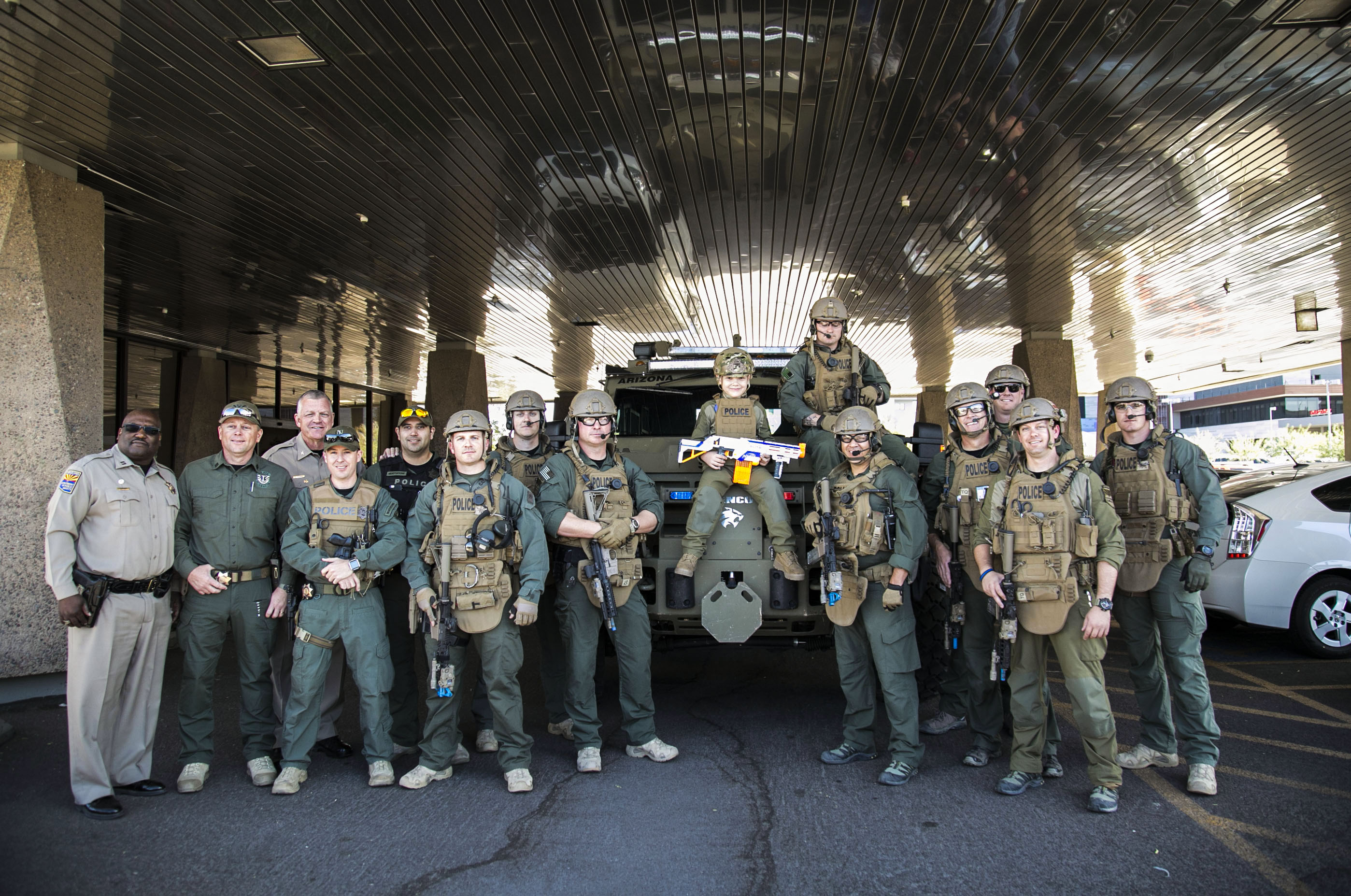 When it comes to being brave, the members of the Arizona Department of Public Safety SWAT team have nothing on wish kid Raiden.

Raiden, who joined the team as his one true wish to be a SWAT officer, is currently fighting a rare type of cancer but that doesn’t stop him from living life to the fullest.

“Raiden has Langerhans cell histiocytosis (LCH) and he’s spent the past year in and out of the hospital getting chemotherapy treatments,” said his mom, Elizabeth. “He’s been through a lot, so a big part of his wish is about feeling like he’s a part of a team.”

With the help of the DPS SWAT, Raiden was able to forget about his cancer for a day and become an official SWAT team member on a special mission to save some important hostages!

To make it official, Raiden was issued his own custom SWAT uniform from TYR Tactical and sworn in as an honorary officer with the team by Arizona DPS Director Frank Milstead, who has a very special connection to Make-A-Wish.

In 1980, Frank Milstead’s father, Ralph Milstead, was the Director of DPS who helped grant the wish that inspired our organization – Chris’ wish to be a motorcycle officer!
"I was able to walk in my dad's shoes and grant another wish for a child who loves law enforcement and what we stand for," said Milstead. "This was probably the best day I have had all year."

Raiden too was smiling. He was briefed as a team member on a “hostage” situation happening nearby. Two Build-A-Bear teddy bears had been kidnapped and Raiden was the person who would save the day!

Raiden and his team loaded into Ranger 1 helicopter and flew Phoenix Children’s Hospital to search the premises for bad guys – and to show off his new uniform to his favorite medial staff members. His medical team had news for Raiden - a folder with photos of the kidnappers and a ransom note.

“The bad guys were demanding candy and waffles and cheesesteaks, but I suggested we bring in pizza and a kitten to distract them and take them down!” said Raiden.

Before going in to catch the suspects, Raiden learned important tactical training and skills. He was issued a NERF gun, helmet, backpack, plate carrier and tactical belt just like his SWAT team members, and off they went in the SWAT armored vehicle to save the hostages.

“This was way more fun than birthdays or anything combined!” Raiden exclaimed.

Raiden and the team conducted hostage rescues while his sister Mariah negotiated with bad guys. Thanks to Raiden, the bears were safe and the mission was a success!

“The things Make-A-Wish Arizona does for kids is phenomenal, but it’s the little things that matter, like getting a uniform just like the guys and learning the little tricks and tactics they have to be a member of the team,” said Elizabeth. “I don’t think a lot of people understand everything my son is going through, but to see the team come together for him, Raiden will treasure this day forever.”

Now home but still wearing his uniform daily according to his mom, Raiden is busy focusing on a very important mission - chemotherapy to defeat his cancer.

Milstead says the strength and positive attitude Raiden showed on his wish is exactly what he need to have on his SWAT team. He is holding a spot on the team for Raiden once he becomes old enough, at Raiden’s insistence.

“It was an honor to help Raiden fulfill his wish,” said Milstead. “He will always be a member of the team and the DPS family.”