"USCRI Is Everything To Me" - Teklewoini's Story 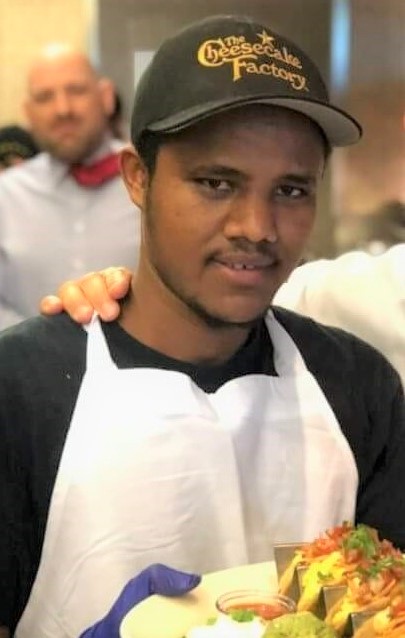 I grew up in a village in the mountains of Eritrea. I was a very smart student, but I didn’t have the chance to receive much schooling. I had to work on a farm to help feed my family. My father was in the Army and I only saw him for one month every two years. I knew that when I turned 18, I would be forced to join the Army too. The Army does not pay enough for you to survive—it is a very hard life. I wanted to have a chance to go to school. It was just a very, very bad life in Eritrea.

I left at the age of 17. It was very hard to cross the border into Ethiopia. You had to wait until it was dark. If the Eritrean Army saw you, they would shoot you. I will never forget that day when I crossed the border.

I spent 5 years in a refugee camp in Ethiopia. I learned English and took up woodworking. For 3 years, I worked as a community health worker in the camp. I was a team leader for 300 people. I speak Amharic, which was useful in the camp.

Seeking asylum was a long process. When I learned I was going to the U.S., I requested to move to Iowa. I had one friend who already lived here and he recommended Des Moines because it’s not a big city and there are opportunities to succeed here.

I came to Iowa in 2017 and could speak some English already. I am proud that I did not need an interpreter. I told my case manager everything. USCRI helped me find a job as a dishwasher at the Cheesecake Factory. The job was busy, but I grew up on a farm so I was used to hard work. To me, the job wasn’t too hard.

I can learn new things quickly and after two months, I was promoted to line cook. The best part of the job was that I learned to cook more than 350 kinds of food. I knew all the preparation required for every single dish. I knew every job in the kitchen. My boss gave me lots of overtime because I could cover every station in the kitchen. I eventually left Cheesecake Factory for a job at a Hilton hotel, which is where I’m currently working.

There are lots of opportunities here in the U.S. I am going to school 2 days a week and will graduate with my GED in a month. I was planning to open my own East African restaurant with a friend. We worked on a business plan together, but my friend backed out. I still hope to open a restaurant someday, with my family’s help.

Life in the U.S. has not really been what I expected. It’s been hard with no family here. I haven’t seen my family in 9 years. My parents, my sister, and my three brothers are in a refugee camp. My brothers are good students, like me, and they are going to school in the camp. They have all been interviewed and I am hoping they will be here with me by the end of this year.

I’ve learned a lot of things in my life. It is very hard. Even in the refugee camp, they don’t give you enough money for food. You don’t get any help from anyone. I had to make friends there to get by.

USCRI gave me a lot of things. They gave me a home, helped me with rent, took me shopping, helped me apply for Medicaid and food stamps, and gave me everything I needed. They also gave me a lawyer to help with my family coming to join me here in Des Moines. My case worker is my friend and USCRI is everything to me.